Tell me about the dream.

I am sitting in the mouth of some cave high up above a rushing river.  It’s India, I know because of the woman in front of me. She’s a sadhu. A holy woman. Her forehead is painted ash white with a smear of crimson across her brow.

Dawn must have just broken because it’s fucking freezing and I’m bundled in a blanket. And my face is wet from the mist which billows in from the clouds which are still lifting from the cliffs.

I am waiting for the old woman to speak.  But I have no idea what I am doing there or what I have come to hear.

What does she say?

Nothing, for a long time. But then she starts to hiss and shudder and it scares the shit out of me. And then she just says:

“What of me?” I throw back, but wearily.

“You are of the time,” she says wincing so that her face paint cracks into an ancient desert floor.

“Tell me of the time.” I whisper. And a sense of mortal dread haunts my gut.

Then the sadhu opens her eyes, piercing the darkness with two sparks of pure white light.

“This is the time. When two beings shall pass in the street. For one, the world is dying.  For the other, it is just being born.  And neither shall be able to see to the nother.”

I wait for a moment, trying to hold back the only question I know to ask:

Suddenly I feel my eyes being shut by some terrible force.  I try to keep them open but that fight lasts only a few seconds before I am plunged into a vast, impenetrable darkness. Beyond time and space.

Can you describe it?

It’s not just a place void of light, but one that is filled with what feels like infinite, inescapable nothingness. And yet this nothingness has some all-pervasive identity.  It’s hard to describe. But to say that it’s like a form of self. A knowing. An awareness. And I’m being fucking crushed by this sensation that…

That there is nothing else. That everything comes from this. And that it is… me. Not me as my self.  But me as a fractal component of everything that exists.  And I know it is asking me to surrender.  But I don’t want to.

Because this is something close to death.

Is that the end?

No. I can hear my voice ask the question again. “Which one am I?”

And I hear her voice too, but now its coming from somewhere inside of me.  She’s asking, “Do you see me?”

And suddenly it’s over and I’m back in that cave. And I want to answer, but I can’t speak. Because what I know for my self is the truth and it’s the most definitive thing, the most awful and saddest thing I think I have ever seen.

What do you see?

Nothing.  Nothing at all. 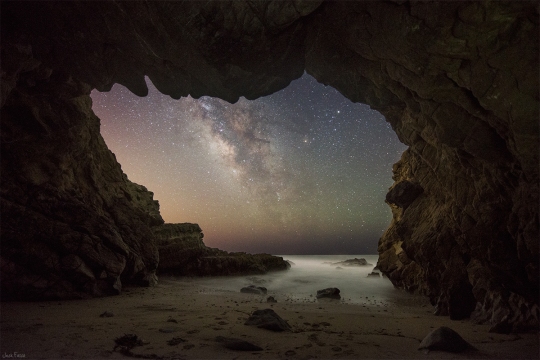 [The core theme is the quote above that comes from a prophecy that in the end times humans will be divided into those who have chosen to fight for and perish within the system they believe to be ‘true’ and those who understand that there is an entirely new reality beyond the grasp of their intellect… but which they must believe in before they can inhabit it. And that in that time of this choice, we literally will not be able to see the other (because we’ll be vibrating at such different spiritual frequencies).]