There is a kind of spiritual warfare that is being waged against the population of the United States.

It is one that herds people through the triggers of their moral and political outrage into adversarial camps that effectively devastate the risk that a united population poses to an economic elite who are now effectively governing a neo-caste system disguised as a free market economy.

In metaphysical circles, this is known as “stalking” and it is being orchestrated by masterful forces who cynically view hot-button issues like BLM, MAGA, COVID policies, gender equality as programmable binary levers that essentially keep people locked into predetermined (adversarial) behavioral modes.

The perfect example of this was the 2020 election — in which ‘good’ progressives were effectively terrorized into choosing between a lesser-evil (false) dichotomy — that elevated the wildly insubstantial candidacy of Joe Biden into the election of yet another longtime military-industrial complex proxy who understands his role is to contain the upstart masses on behalf of the elite class.

All at a time in which the civilizational tide is clearly being drawn out for what looks to be a crushing and monumental wave of counter-cultural, anti-establishment activity.

In one of his lesser-known illuminations, Alan Watts identified this phenomenon and offered the answer to its pernicious societal manipulation — as he did for so many of our modern socio-political entrapments — as rooted in the most ancient of iconographies.

Continuing my series on Watts’ more heretical contributions to spiritual and political awakening, I am not sure there is an any more relevant or precise admonition from the sage which so many love to quote — but perhaps less are able to authentically apply — than the one was issued under the title, Seeing Through the Game.

It is by far one of Watts’ most subversive, and will be the most challenging for those who have dug in to the ‘high ground’ with all their might.

Just take in the first sentence.

Obviously no society can tolerate within its own borders the existence of a way of liberation, a way of seeing through its institutions without feeling that such a way constitutes a threat to law and order.

I mean really take it in. Because our first instinct in this Rorschach universe we inhabit, is to immediately imagine that WE are the way of liberation, operating outside of ‘society’, being the harbingers of a new way. But let me tell you on behalf of Watts himself, that as long as we are still buying in to the idea of an ‘us’ and a ‘them’, we are being cowed and stalked and defeated.

Still feel like venturing in? Here is the whole thing:

Obviously no society can tolerate within its own borders the existence of a way of liberation, a way of seeing through its institutions without feeling that such a way constitutes a threat to law and order.

Anybody who sees through the institutions of society and sees them for, as it were: created fictions in the same way as a novel or a work of art is a creative fiction.

Anybody who sees that, of course, could be regarded by the society is a potential menace.

In other words, you may put it in another way: one of the basic things which all social rules of convention conceal is what I would call the fundamental fellowship between ‘yes’ and ‘no’. As in the Chinese symbolism of the positive and the negative, the yang and the yin.

You know, you’ve seen that symbol of them together like two interlocked fishes. 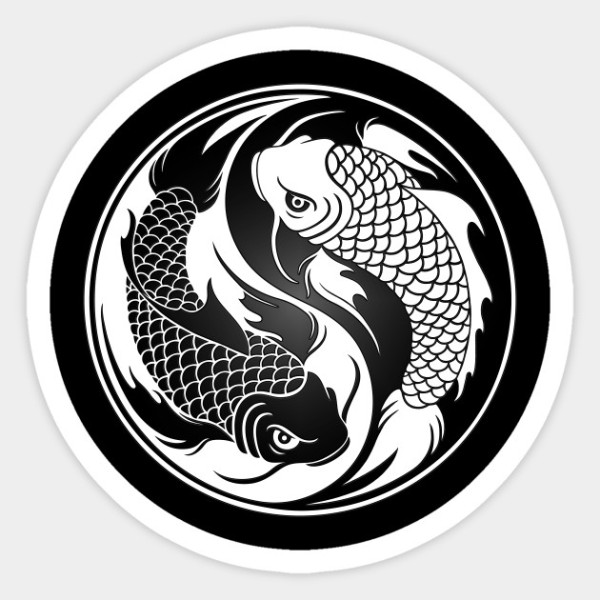 Well, the great game – I mean the whole pretense of most societies – is that these two fishes are involved in a battle. As the ‘up’ fish and the ‘down’ fish, the ‘good’ fish and the ‘bad’ fish.

And they’re out for killing.

And the white fish, one of these days, is going to slay the black fish.

But when you see into it clearly, you realize that the white fish and the black fish go together. They’re twins, they’re really not fighting each other, they’re dancing with each other.

But the theory is, you see, that if people find that out, they won’t play the game anymore.

I mean supposing a certain social group finds out that its enemy group which is supposed to fight is really symbiotic to them. That is to say the enemy group fosters the survival of the group by pruning its population.

Would never do to admit that.

Would never never do to admit – just as George Orwell pointed out in his fantasy of the future 1984 – that a dictatorial government has to have an enemy. And if there isn’t one, it has to invent one. And by this means …by having something to fight, you see… having something to compete against… the energy of society, to go on doing its job…

And what the Buddha or bodhisattva type of person fundamentally is, is one who has seen through that, who doesn’t have to be stirred up by hatred and fear and competition to go on with the game of life.

If it does, would it be possible to stave off the shrieking voices all around demanding you to consider the stakes and the necessity to choose and do what’s right, to consider:

What rights and freedom and political parties actually mean.

When they are sanctioned and governed by the ‘institutions’ most under threat, itself.

[To be specific, the institutions Watts is referring to are those which pose themselves — like ‘professional’ wrestlers — as ‘opponents’ while in fact achieving easily distinguishable outcomes that benefit one very distinct layer of society. That being the economic elite, and their political and military proxies.]

And, maybe, even further:

Then, to question in a non-reactionary way: whether our place belongs within or without that superstructure.

And if without, then what that would actually look like.

And who you would be in that new paradigm.